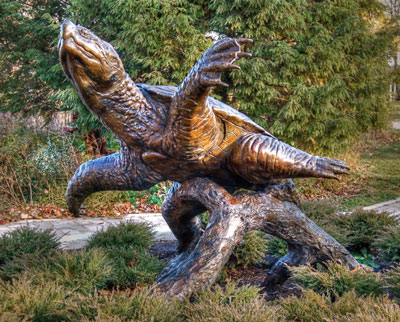 When the River Corridor Foundation of St. Charles began, the work ahead was both vital and daunting.  With a long and difficult path before us, we knew that both persistence and endurance would be needed. The turtle immediately came to mind.

While the turtle is a frequently seen inhabitant in the Fox River corridor, it also is associated with many aspects of the Foundation’s work. Many cultures around the world use the turtle to symbolize soil or water and some, like many Native Americans, associate the turtle with the Earth itself. This symbolism is easy to understand as the turtle is one of the oldest living animals with fossils dating to over 200 million years old. The turtle’s association to water and earth, protection, endurance, determination, and persistence make it a fitting symbol of the foundation.

The Annual Golden Turtle Award was created to recognize a person, group, or organization that has contributed significantly to the development, preservation, enhancement, and appreciation of the Fox River Corridor of St. Charles.

We hope the award will help raise consciousness of residents that the Fox River serves as one of our community’s greatest resources. We hope to also encourage and recognize those who are committed to maintaining its ecological health as well as those who enhance its usage as a gift of nature.

Rev. Al Patten had the idea and formed the first River Corridor Foundation’s Award Committee. Each year a new award committee will be formed. Winners of the award receive a plaque, a second version of this plaque is on display in the St. Charles Municipal Building and contains the names of the yearly recipients.