If I Could But Fly Sculpture Installation and Dedication 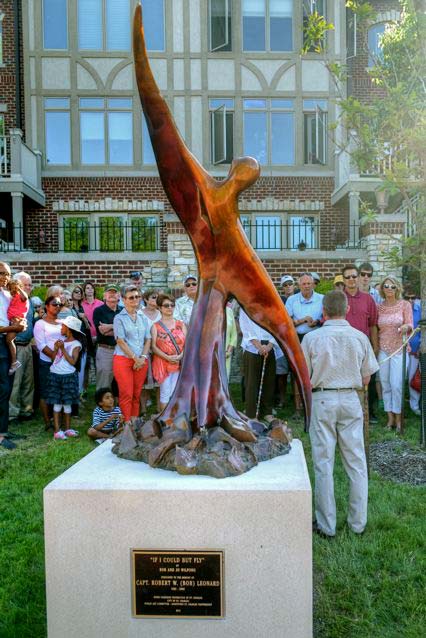 The sculpture purchased by the River Corridor Foundation of St. Charles, If I Could But Fly, in memory of Bob Leonard, has been installed along the Walkway also bearing his name.  Completion of its journey from Colorado to St. Charles found it lifted through the air and landing on a concrete base located behind the brownstones just south of the Indiana St. Pedestrian Bridge.
The City of St Charles, The River Corridor Foundation of St Charles (RCF), Downtown St Charles Partnership, and Public Art Committee on Friday, May 30th dedicated the “If I Could But Fly” Sculpture in memory of Bob Leonard who over 10 years ago was a main visionary of the Fox River being a major asset of the community. His focus has since been adopted by the organizations listed plus the St. Charles Park District, St Charles Kiwanis, St Charles Rotary and Pottawatomie Garden Club of St Charles.
The Dedication Ceremony was led by Diana Brown, Chair, Public Art Committee, who gave her introductory comments then introduced the Mayor of St Charles, Ray Rogina, for comments as well as the artist, Bob Wilfong and John Rabchuk, VP, RCF. Pete Leonard, Bob Leonard’s son, led the attendees in toasts in memory of the organizations that supported the purchase of the sculpture.